Or you could just watch the streetlight change. . .

Italics.  That’s the traditional sci-fi device for indicating telepathy, conversation between minds.  I enjoyed Darkship Thieves, but I came away with the nagging thought that the telepathy was almost cheating. . .

I have a large collection of science-fiction books from the ’50s, ‘60s, and ’70s of the previous century, but it tapers off after that—not sure why.  Occasional forays into ‘Best Of’ collections left me cold: younger writers seemed to write obsessively about trendy, computer-lingo topics, where the stories got lost in dense verbiage and remained unmemorable.  So I haven’t been reading much ‘contemporary’ science-fiction, preferring to revisit some old favorites, especially the always amazing Jack Vance (the only SF writer I have collected).

I was intrigued, though, by the web page of a prolific authoress named Sarah A. Hoyt.  She is a member of Glen Reynolds’s Instapundit team, recommending articles of interest (especially to conservatives), and she also has her own blog, According to Hoyt.  There we learn that she is “a novelist with (I think) twenty three novels out.”  They run a gamut from Science-Fiction to Fantasy (her caps), including ‘Historical Fantasy’, ‘Historical Mysteries’, and others (see her Book Page).  Her SF she defines as ‘Space Opera’, a term that stems from the swashbuckling pulp-magazines of the 1930s.  So what is twenty-first century Space Opera like? 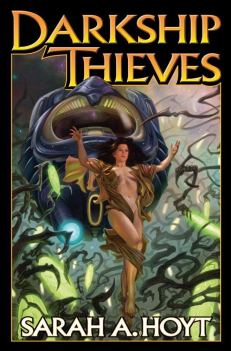 I decided to find out, buying a copy of the first in her ‘Darkship Series’, called Darkship Thieves (2010), and taking it on vacation in Virginia.  It was a longer read than I expected, but an entertaining romp.  Right off it’s non-stop action: the heroine, a willful, adventurous daughter of a prominent ruler, named Athena, awakens in her father’s space cruiser: “Before full consciousness, I knew there was an intruder in my cabin. . .”  Athena dodges attackers and escapes into the ‘Trees’, an orbiting biological matrix, invented a century ago by superhuman but sterile ‘Mules’, products of eugenic bio-engineering, who for a time ruled the Earth.  She ends up in a Darkship, dedicated to stealing power pods from the Trees.

Turns out these Mules and their cadre of bio-modified assistants had fled the Earth after normal humans rebelled, and established a secret colony in the Asteroid Belt, called Eden.  This intriguing future history is revealed slowly, and becomes quite complex as the story progresses (elevating the novel to more than ‘space opera’, I must say).  Early on we learn that Athena has some extraordinary powers of her own, especially an athletic ability to move faster than normal people (and kick males in the crotch), and (it eventuates) to communicate telepathically.

Sarah Hoyt writes in a first-person, conversational style, that I might call breezy, except after Athena ends up on Eden and falls in love with her captor, named Kim, when she indulges in long internal monologues that begin to drag, right when the reader is impatient for more action (could be that female readers would be more receptive, I admit).  But eventually Athena and Kim end up marrying and commanding a Darkship of their own.  Kim, a natural telepath, has brought out the ability in Athena, which is essential for the tricky two-man operations in the thick of the Trees.
The rulers of Earth, meanwhile, have mounted a campaign against the Darkship thieves from Eden, so unsurprisingly Kim is captured, while Athena manages to escape and make contact with underground friends from her rebellious past.  I won’t reveal all of the machinations and the surprise ending, but suffice it to say that with the help of her associates Athena manages to free Kim.  It is in this last struggle that her ability to communicate telepathically with Kim makes possible his rescue:

The airlock was dry and on the other side was a hallway with only a little water on the floor . . . there was a detachment of goons facing me.
I burned in a scything motion, aiming for their necks, because their bodies might be armored and heads exploding is only interesting as a figure of speech.  They all went down.
Kit, I’m here.  Where are you?  What level?
For a moment, there was no answer and I thought they’d moved him, I thought—
This level, he said, having got the image of where I was from my mind. From his memory he sent me the image of which corridor to take, how to get to his cell, how to get him out.
Be careful, love, I’m guarded.
Oh, I wouldn’t expect anything else. . .

Italics.  That’s the traditional sci-fi device for indicating telepathy, conversation between minds.  I enjoyed Darkship Thieves, but I came away with the nagging thought that the telepathy was almost cheating.  Well, not really cheating, but a device, like a deus ex machina, a fortuitous coincidence that enables an author to dodge the requirements of plot causality and, well, drop a meteor on a pursuing space ship, or just find out a door wasn’t locked at all.  I’ve no doubt that Sarah Hoyt could have had Athena rescue Kim without communicating telepathically, but since they could, well—why not?
Maybe my problem is that I don’t see telepathy, or its congeners like telekinetics, or teleportation, all the phenoma labeled ESP (extra-sensory perception) as plausible science.  For me it has begun to move into the realm of fantasy.

ESP, or ‘parapsychology’, goes back a long way; its heyday was in the ’40s and ‘50s, when J. B. Rhine was performing card-reading experiments at Duke University, and John W. Campbell was editing Astounding Science Fiction magazine.  James Wallace Harris (a blogger, responding to a comment on his post ‘Has Telepathy Become an Extinct Idea in Science Fiction?’) writes in 2015,

Science fiction can be almost anything people want it to be. . . And I also know psychic abilities are a fun plot element that still show up from time to time. But the appeal over ESP today is nothing compared to what it was in the 1950s. It was a theme that dominated in the old Astounding Magazine (now Analog). I think John W. Campbell thought psi-powers were the sign of next- stage humans. However, over the decades the interest in the paranormal has fallen off.

Another blogger, Traci Loudin, writes in 2012 on ‘Telepathy as Science-Fiction’:

Most people regard telepathy in the modern world as pure fantasy. No solid results have come out of parapsychology, and enough people claim to be telepathic to some degree that it’s almost a superstition these days. So it’s no surprise that some well-known science ction authors consider telepathy to be outside the genre. Charlie Stross, a hard SF author who has won the Hugo and other awards, goes so far as to consider telepathy in SF novels dumpster-diving.

“Dumpster diving”?  That’s a bit rough.  I have not read enough ‘modern’ science-fiction to comment on the prevalance of telepathy today, nor to the extent it is a mere device, but clearly there is a continuum, maybe an historical one.  Back in the ’50s and ‘60s there were whole novels based on the existence or imminent possibility of ESP powers, e.g. Alfred Bester’s The Demolished Man (1952), with conflict between telepathic ’Espers’ and normal men; or Theodore Sturgeon’s More Than Human (1953, original novella, ‘Baby Is Three’), where humans with different psionic abilities form a new kind of being with complementary powers.

Encounters with (often superior) alien species have often credited them with telepathic abilities, and of course this has been a common device in movie and TV science fiction.  It certainly gets around the problem of communication with humans, so might be considered ‘cheating’, but doubtless that depends on how fundamental telepathy is to the story.  ‘Hive-mind’ type aliens might need it to have evolved beyond ants or bees.

At the margins, where telepathy is not, perhaps, essential to the story, but can help move things along (or even complicate them interestingly?)—is it cheating?  For me, it is at best an idle question, which just popped into my head when I closed Darkship Thieves.  The best answer is probably, “If you don’t like it, write your own damn novel.”  Which I would, if I could tell a story as well as Sarah A. Hoyt.  /LEJ